The cryptocurrency universe has been enduring a long and brutal bearish market since the great implosion of 2017 and things have not been looking good for a few currencies.

One of the digital assets to suffer the wrath of the bear has been NEM foundation’s native currency XEM, which recently announced a complete restructuring of the Foundation, scheduled for the end of the month.

The NEM foundation released a formal joint statement along with NEM Labs on the issue of funding proposals and the way forward, 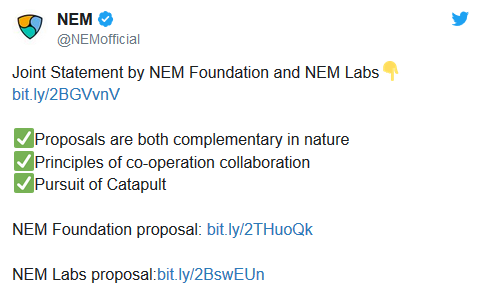 According to the announcement, the major structural change that the proposal is initiating with respect to the democratic and decentralized code of conduct will be their mode of operations. The NEM foundation has called for a POI or “Proof of Importance” vote in support for a funding request.

It was also announced early this year by the Foundation that a major part of the team will be redundant in the coming months due to a lack of cohesion in envisioning a common goal for the foundation.

The joint proposal by both the NEM divisions of the cooperation has been labeled as “complimentary in nature”. The proposal leans towards a more cooperative and collaborated form between the Foundation and NEM Labs. The primary focus remains the overall development of Catapult, which is the core NEM engine for smart contracts and dApps.

“Both parties have their own scope, though we will be working towards the same objective – a promise to the community that our mission-critical priority is in the launch of Catapult. Both NEM Foundation and NEM Labs will work together to accomplish this as part of the same ecosystem.”

In an earlier announcement, NEM had signed a strategic partnership with Vault Ltd, an AI-powered blockchain solution for secured final transactions. This partnership was initiated so that despite significant restructure and reduction of the foundation’s workforce, the project will still keep its horses moving forward towards growth.

However, it did not have a positive impact on XEM’s price valuation as XEM has fallen below in the rankings to 19th at press time, holding a market cap of about $350 million and is valued at $0.038 per token.

The Joint report summarized with the statement:

“Both NEM Foundation and NEM Labs have different scopes that complement each other. The reality is that the adoption of NEM is not the work of a single entity. Proven ecosystems all consist of multiple purpose driven entities that solve specific problems. We are convinced of a future where independent entities like NEM Foundation and NEM Labs solve specific problems for the NEM ecosystem in a unified approach.”